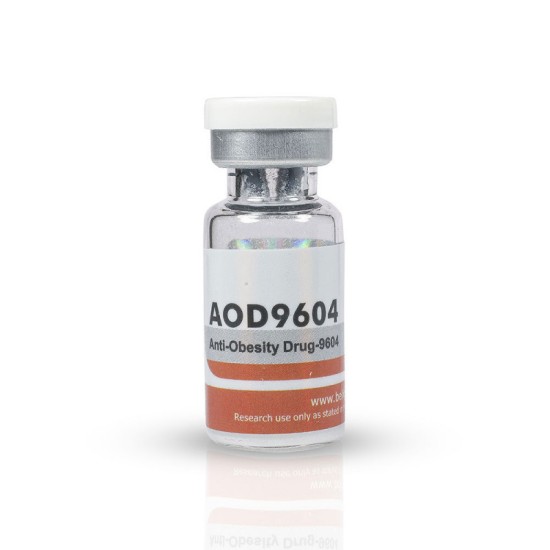 AOD 9604 is one of the best peptides for weight loss. It also has additional benefits that can help with fat reduction, better metabolism, and more.

No adverse effects on blood sugar or growth

AOD 9604 has been shown to have very favorable cartilage repair and regenerative properties, especially when paired with peptide BPC 157.

Mechanism of Action: AOD-9604, also known as Tyr-hGH Frag 176-191 has been proven to have a strong fat burning capacity, without creating a desire to overeat. It doesn't affect blood sugar or tissue growth. (Heffernan 2001 Heffernan 2001, Ng 2000). AOD-9604 activates degradation and fat burning (oxidation), by a method that doesn't use hGH receptor. It has its own mechanism of action independent of hGH. Laboratory studies on rodents, pigs, dogs & humans have identified AOD-9604 mechanism where it triggers fat release from the obese fat cells predominantly and works to reduce the accumulation of new fat in fat cells as well as increasing fat burning. What is extraordinary about the AOD-9604 is its ability to reduce abdominal fat stores.

The second most potent fat loss peptide is CJC-1295, since it leads to the increase in overall GH levels in the body (the opposite of what happens typically as individual age) This explains one of the reasons people have tended to gain fat as they get older. If your only goal is fat loss, it's usually best to avoid using products GHRP (GHRP-6, GHRP-2 or GHRH’s) because they may give you the side effects of increased hunger and raised cortisol. AOD-9604 does not increase hunger & or raise cortisol.

AOD-9604 (Advanced Obesity Drug) was originally developed by Professor Frank Ng at Monash University in Australia in the 1990s, with the intent of finding an anti-obesity drug that had the fat burning effects of human growth hormone (HGH) without the muscle-building effect. Other recent findings have shown, in addition to its fat loss properties, AOD 9604 processes many other regenerative properties associated with growth hormone. Currently, trials are underway to show the application of AOD 9604 in osteoarthritis, hypercholesterolemia, bone and cartilage repair. Results of oral glucose tolerance test demonstrated that, in contrast with hGH, AOD 9604 has no negative effect on carbohydrate metabolism. There were no anti-AOD 9604 antibodies detected in any of the patients selected for antibody assay. In none of the studies did a withdrawal or serious adverse event occur related to intake of AOD 9604.

Quickview
Apto-Turinabol 10mg
$35.00
Ex Tax:$35.00
Add to Cart Add to Wish List Compare this Product
Tags: aod beligas , beligas pharma
We use cookies and other similar technologies to improve your browsing experience and the functionality of our site. Privacy Policy.