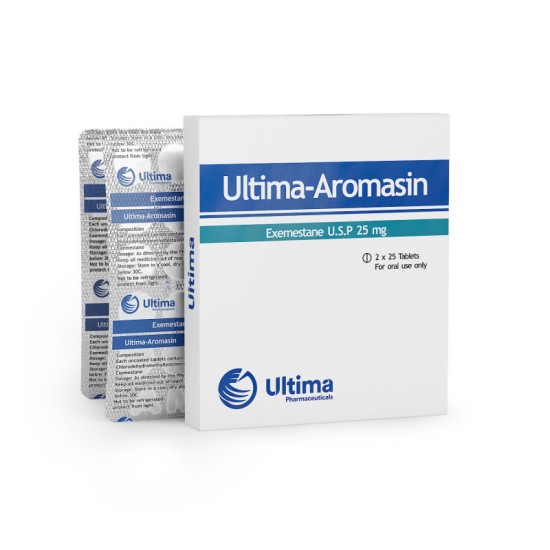 Ultima-Aromasin is a recently developed and potent anti-estrogen medication that works by preventing the conversion of other molecules in the body to estrogen. It is used in a clinical setting in the treatment of post-menopausal breast cancer patients after other treatments have failed. As estrogen is produced in various locations around the body after a woman has gone into menopause (rather than from the ovaries in a premenopause woman), Ultima-Aromasin acts on those enzymes. Due to the fact that many steroids are converted into estrogen in the body’s tissue, Ultima-Aromasin has proven popular in the bodybuilding community.

Many anabolic and androgenic steroids are converted into estrogen in the body and, for men, this results in undesirable side effects such as gynecomastia, fat buildup, and water retention (which can hide muscles under a layer of definition-softening water). Ultima-Aromasin may even help some to lose body fat, boost testosterone levels (up to 60%) and increase somatomedin (which is anabolic in and of itself). Despite its testosterone boosting properties Ultima-Aromasin is not generally used in post-cycle regimes and is at its best on a full cycle.

In the bodybuilding community the recommended intake to avoid estrogen buildup is 12.5 mg to 25 mg a day. Ultima-Aromasin is one of the most potent anti-estrogen drugs on the market with studies reporting estrogen levels being lowered as much as 85% in a group of women. Thus, dosages can vary widely depending on personal chemistry and the potency and amount of steroids being taken with as little as 2.5 mg of the drug having a measurable effect in some individuals. 12.5 mg every other day may prove effective for some individuals. Finding out what dosage is appropriate per each individual is important, especially with such a potent anti-estrogen, as too little estrogen in one’s system can actually reduce muscle gains and diminish the sex drive.

Ultima-Aromasin can, in men, can increase the risk of cardiovascular disease occurring. Men who are concerned with their cardiovascular health should consider other anti-estrogen medications. Women using Ultima-Aromasin for medical reasons may experience a host of side effects from hot flashes and upset stomachs to a number of bone related issues, high blood pressure, and birth defects in pregnant women. As a steroidal suicide aromatase inhibitor, some of Ultima-Aromasin estrogen lowering effects can be long lasting as it binds irreversibly to estrogen converting enzymes.

Ultima-Aromasin generally comes in tablet form with about 25 mg of the drug present and is widely available in most pharmacies both in the US and abroad under that name.