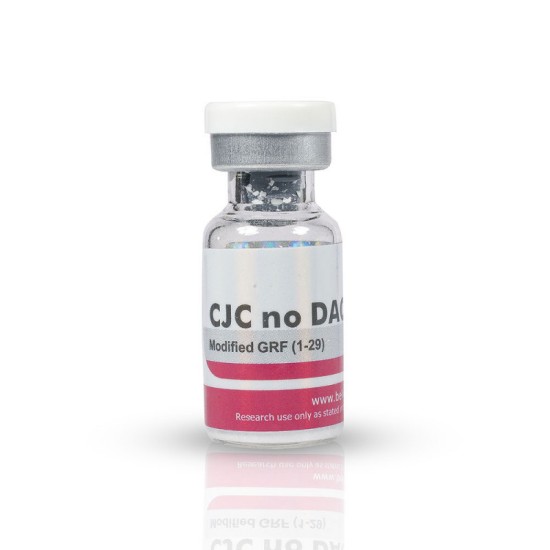 CJC-1295 is a synthetic GHRH (growth hormone releasing hormone) analogue made up of 30 amino acids. It has been found to be highly effective with regards to the increase of growth hormone secretion and IGF-1 without negatively affecting the pulsatility of GH secretion. CJC-1295 is often combined with Ipamorelin due to its enhanced specificity as a GHRH. This peptide generates similar increases in growth hormone secretion, but without the appetite stimulation and increase in cortisol, acetylcholine, prolactin, and aldosterone seen with other peptides in its class. This peptide has been found to be very well-tolerated and perfect when combined with Ipamorelin.

CJC-1295 also promotes slow wave deep sleep, which is responsible for the highest level of muscle growth and memory retention and rejuvenation.

GHRH (growth hormone releasing hormone) is produced in the hypothalamus. Its pulsatile release from the hypothalamus triggers a pulsatile release of GH from the pituitary gland. GHRH has a very short half-life of only a few minutes (half-life = the time required to remove half of the substance from the blood. The shorter the half-life, the more rapidly the substance is removed from the body, and the less its effect on the body). The first 29 amino acids of GHRH is the active segment. They are available as a manufactured peptide called Sermorelin. Sermorelin was further modified to increase its half-life to 30 minutes. This is called CJC 1295. CJC-1295 was further modified by adding DAC (Drug Affinity Complex) to it. DAC binds to a blood protein called albumin, which increases it's half-life to 8 days. It is called CJC 1295 + DAC. CJC 1295 can also be compounded in a non-DAC form which mimics a more normal physiologic GH spike each night. The longer half-life from the DAC binding to albumin means injections are only required once or twice per week. However, the long half-life and relatively constant blood level provide a constant stimulus for GH release from the pituitary through the GHRH receptor, which is not physiological. This can decrease the GH pulse amplitude which will result in decreased GH tissue stimulation.

It is recommended when using a long-acting CJC molecule to have 'hormone holidays' of three months each three to six months, to allow the pituitary to 'recover'. During the holidays, Sermorelin is used instead of CJC 1295 + DAC.

Quickview
AOD9604 2mg
$25.00
Ex Tax:$25.00
Add to Cart Add to Wish List Compare this Product
Tags: buy cjc , cjс , peptide. beligas peptide , pep
We use cookies and other similar technologies to improve your browsing experience and the functionality of our site. Privacy Policy.